Go Slow! B00, (SOUND) Get ready for some Halloween Fun.
Translate

And a mountain man. And Daniel Keith was a mountain of a man. Daniel Keith, never said a word after he was hanged. And no one reported seeing his ghost. No mysterious lights appeared in upper-story windows and no phantom bells were heard upon the wind in Rutherfordton, North Carolina. But the soul of an innocent man cast a long shadow a shadow that could be seen through the years.

Daniel Keith Lowered From The Gallows

Rutherfordton, about seventeen miles east of Lake Lure on US Highway 74, was the seat of Rutherford County at a time in North Carolina's history when corporal punishment was carried out in public, at a time when many men and women were convicted of felonious acts on less evidence than is today required even to bring a case to trial. Nobody on the jury hearing the trial of Daniel Keith believed a word he said on November 9, 1880, at the county courthouse in Rutherfordton. A child had been murdered. An eight-year-old girl's body had been found the previous February. It was the sort of brutal murder that caused the citizens' lust for justice to overtake their reason. The girl had been beaten to death with a rock, her head repeatedly pounded until no life was left in her frail, bloodied body. Someone reported seeing Daniel Keith near the child's home on the day of her gruesome murder. Witnesses testified that he had been drinking that day. It was enough to send the sheriff to old Dan's house that same night. According to the sheriff, one N. E. Walker, old Dan was sober. Dan claimed no knowledge of the girl's ghastly demise, yet Sheriff Walker found a bloodstained shirt on the back porch of his house. Dan protested that the shirt was merely one he'd worn while cleaning rabbits, but he was arrested for the grisly murder all the same. He came quietly with Sheriff Walker, certain that his innocence would eventually be proven. Perhaps the good people of Rutherfordton believed such a brutal crime could have been committed only by a brute of a man, and Daniel Keith was definitely that. By all accounts he was huge, with red-complected hands, the type of hands you could imagine lifting a rock over a child's small head. Dan wore a thick red beard over a ruddy face and towered above the other menfolk of Rutherford County. Many people believed it was his size alone that caused Dan to be suspected as the murderer. As the days turned into weeks, passersby often reported that they heard angry shouts from the jail where Dan was being held in a cell against the south wall. Big Dan was questioned again and again in an attempt to elicit a confession. Throughout the months between his arrest and trial, however, he continued to maintain his innocence as he had on the day of his arrest. "I have kilt nobody," he vowed. "And them what say I did will pay the devil every day for saying it."

Daniel Keith during the trial in November of 1880

As the trial commenced, Daniel Keith was tried simultaneously on the street corners of Rutherfordton, where townspeople gathered to angrily reaffirm his obvious guilt. Popular opinion held that they shouldn't even waste time trying a man who would kill a helpless little girl with a rock. Inside the courtroom, Dan wore a homespun, bright green shirt with wooden buttons and a grim expression of utter disbelief. The trial was not a lengthy one. A number of townspeople testified against Daniel Keith. One sixteen-year-old lad swore that he heard the little girl scream and that he saw Dan lumbering away from the area soon afterwards-with blood dripping from his hands. However, the shirt the boy said Daniel Keith was wearing wasn't the same color as the bloodied shirt found on the big man's back porch. Most people believed the boy was fabricating a tale, seeking status by playing up to the outrage of the citizenry. Still, his testimony was allowed to stand. In the witness chair, Daniel Keith continued to claim his innocence. His voice was said to be so strong that it was heard clearly across the street from the courthouse. The gentlemen of the jury (no woman sat on a jury in the 1880s in North Carolina) were told by the prosecutor that Daniel Keith was a monster, a beast. And they were told there was only one way that the women and children of the community could be protected from the brutality of a creature like big Dan. Less than an hour's recess was required for the jury to deliberate, and the court was reconvened to hear the verdict. He was found guilty as charged. Daniel Keith was permitted to speak before the court's sentence was pronounced. Looking from juror to juror and seeking out the smug faces of the witnesses who'd testified against him, he repeated his threat. "Those who say I kilt anybody are liars," he proclaimed. "And each of you will be hainted every day for the rest of your life. Then the devil will have ye." Daniel Keith was sentenced to be hanged until dead between 10:00 A.M. and 2:00 P.M. on December 11. The judge further ordered all of Dan's property, down to the flour and sugar in his cupboard, to be sold at auction to help pay for the cost of the trial. It was a cold morning when the crowds gathered from neighboring towns and counties to see justice carried out against the monster of Rutherfordton. Buggies and wagons lined the street as the death cart, a horse-drawn wagon, slowly rolled old Dan through the throng of onlookers on his way to the gallows. Sitting between Sheriff Walker and his deputy in the wagon, Daniel Keith remained calm. Before the black sack was placed over his head, before the noose was tightened around his thick, ruddy neck, the condemned was permitted to speak his final words. "The soul of an innocent man don't rest," he said. Tears ran down his face, causing his luxuriant beard to glisten in the cold December sun.

At one o'clock, Daniel Keith was hanged.

Dead Dan's Shadow The Outline Of A Hanged Man

When a man is hanged in winter, it is said that the final dried leaves of autumn fall from the surrounding trees. What curled, brittle leaves floated to the ground that day is not recorded. The crowd dispersed. Families returned to their homes. Talk about the hanging died down as dusk descended and the body of Daniel Keith was lowered from the gallows and placed into the death cart that had brought him there. Besides, there was something entirely new to talk about. A shadow had appeared on the outside of the south wall of the jail, a shadow that remained throughout the night and the next day as well. It was the outline of a hanged man, a big man dangling from a rope. The shadow appeared to be permanent. People from the countryside who’d witnessed the hanging returned to Rutherfordton to view the shadow, and it was widely agreed that it must be a “haunt.” It would take a man as large as old Dan himself to cast such a sizable shadow, someone said. So many people traveled to Rutherfordton to see the shadow that clung to the south wall of the jail that it became an embarrassment for the town. County employees attempted to scrub the shadow from the wall. The persistent scrubbing cleaned the paint off the wood, and still the shadow of the hanged man remained. Then the wall was painted, and additional coats were slapped upon the first. But still the shadow lingered, so clear that it could be seen at night. The jail was eventually sold and made into a private home. People traveling to Rutherfordton continued to ask about the wall. In a final attempt to mask the shadow of Daniel Keith, the new owner planted ivy that eventually covered the south wall. The shadow remained under the ivy, however, haunting those who’d witnessed against Daniel Keith and those who’d judged him guilty of the heinous murder of the little girl, haunting them just as he’d promised. In 1949, two things occurred in Rutherfordton that ended the story of Daniel Keith and the shadow upon the wall. The former jail was converted again, this time into an office building. The remodeling process included tearing down the thick ivy and adding several coats of paint to the south wall. This time the shadow did not return. There were people in Rutherfordton who made note of another curious happenstance. An eighty-five-year-old man who lived in a home for the aged passed away. His name is not important. What is important is that this lifelong resident of Rutherfordton was the same sixteen-year-old boy who’d testified against Daniel Keith during the trial in November of 1880. And he was the last of those cursed by big Dan to Die. Dead Mans Shadow Is Haunting Widely agreed that it must be a haunting The people came for miles to see it. 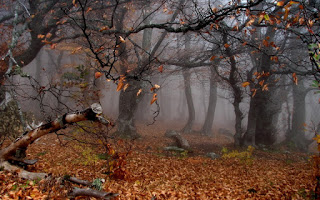 We are adding shadow woods to use as a bacground. Just right click and save to pictures. Then open picture folder and right click on shadow-woods.jpg and click save as background. It automaticly resizes to fit your computer.

We have lots more pages than our door clicks to bookmark and share please.

Lit in memory of those lost due to corona virus pandemic.

Enjoy a Halloween fun scare with Susan the caretaker of this unique international on line haunted house!

***** Lizzie Borden and The House in Fall River Massachusetts *****

Check out Dorothy Parker A fun loving woman and artist! And others like her that were mistreated because at the time it was the popular thing to do. This woman had many friends and she was very artistic. But she got blacklisted. ***** Dracula - Dracula Lives Halloween Fun Scare ****** The Butcher Boy ***** How Creepy Is this. Robert the Doll ***** Barbados Vault ***** HMS Orion ***** China Doll ***** The Flying Dutchman

Harold Shipman Prolific Serial Killer ***** Psychopaths Have Feelings: Can They Learn How To Use Them ***** Cambridge Rapist Peter Cook

***** As you lurk through our dark corridors at one point or another you might want to learn more about us and our Halloween home spun Web site. Home Spun About Halloween Fun Scare ***** Webmaster Things ***** FREE Stuff ***** Boutique Halloween Fun Scare Boutique ****** Awards ***** Webrings. ***** VOTE & Top Sites ***** Add Your Site
We are listed as an absolute terror web site. And an International on line haunted house.

***** I have gone fishing. This is the end of my work at Halloween Fun Scare and I have gone fishing. (This one always cracks me up!)***** ***** Need a break from this haunted house mental institution. Join us or try the mental hotline.
: Subscribe BeWitched Halloween Music PlayList YouTube Halloween Music PlayList Our Scary Pets
Jackson is our guard dog. He will protect this website. Beware!

Web Site Guardian Halloween Fun Scare International On Line Haunted House is luring you with the magic of the night, and the uniquely creative & strange ways that we have fun. We conjure a fun Halloween. This will have you wanting more as our site grows and takes full effect. "We've Got The Spirit"

More of our websites.

Halloween Fun Scare, Inc. All Rights Reserved.
We use cookies to improve your experience.
sitemap