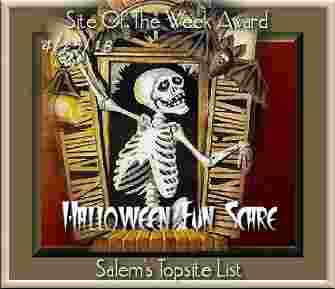 Halloween, as we know it today, is a truly an American phenomenon. The holiday did originaly originate in Ireland. The Celtic people of Ireland celebrated the festival of Samhain on October 31. Samhain, meaning end of summer," was a time to harvest crops and bring herds down from mountainous pastures. Samhain was believed to be a magical time.

The Celtics believed that times of transition, like the interval between night and day, were instances when the boundaries between our world and the spirit world were the thinnest. Since Samhain was the transition between summer and winter, the Celtic people felt that Samhain was a time to honor the dead and try to communicate with beloved ones that died, much like Mexico’s Dias De Los Muertos, or “Day of the Dead." Because Samhain was thought to be a time where the dead roamed the earth, huge bonfires were set atop cliffs to scare away unwanted or evil spirits. However, there is absolutely no evidence that cats or any animals were thrown into these fires as sacrificial offerings. Cats were not even indigenous to Ireland at that time. The only animals that were killed around the time of Samhain were animals deemed unfit for breeding throughout the winter.

Contrary to popular belief, Samhain is not a “Lord of the Dead." There is no deity, demon, or spirit named Samhain. Samhain is simply the name of the festival that celebrates summer’s end. The Celtics had no demons or devils in their religion. The Celtics did, however, believe that fairies existed. These fairies were considered hostile, short tempered, and dangerous. They supposedly longed for the chance to punish mankind for invading their land.

Samhain was very much a harvest celebration and many Celtics believed that any food left on vines, trees, or in the ground after Samhain, was tainted by the fairies and hence, inedible. Samhain was also a celebration of the New Year to the Celtics. Due to the thought that the Fairies and the dead wandered the earth on Samhain, many households put out food for their deceased family members or the fairies to ensure good fortune for the new year. Vagrants usually ate this food, leaving the inhabitants of the house to falsely believe they had been visited by fairies or their beloved dead. Later, the problem of vagrants and pranksters eating the gifts left for the dead or the fairies worsened to the point that villagers started wearing horrific masks to scare away the unwanted. The costumed individuals who scared away the scavengers often carried lanterns composed of a candle inside a hallowed turnip.

During the period when the Catholic Church coerced the Celtics into Christianity, much changed with Samhain. Samhain and other Celtic festivities were combined into All Saints Day, that honored all the Catholic Saints and took place on November 1. The Church did not want to upset the Celtics and cause them to denounce Christianity, but still wanted to end their Pagan celebrations. So, the Church endorsed All Saints Day, but also heavily encouraged prayer and religious festivities the night before. Due to this prayer and celebration on the night before All Saints Day the traditions of Samhain were peacefully restrained, which was the Church’s goal. Over time All Saints Day became known as All Hallows Day and the night before, previously known as Samhain, was now named All Hallows Eve. Eventually, the Catholic Church abandoned its disapproval of the traditions of Samhain, and even supported All Hallows Eve by including it on all calendars. This increased the number of people who celebrated All Hallows Eve greatly and soon the holiday became commonly referred to as Halloween.

In the 1800’s when Ireland suffered many potato famines, over 700,000 Irish Catholics came to America and brought with them the many traditions of Halloween. These traditions soon changed to accommodate their new land. The turnips that were used for lanterns soon became pumpkins and evolved into what we now know as a “Jack-O-Lantern." The wearing of terrifying masks to scare away food scavengers or pranksters, and the custom of leaving food for visitors eventually became “Trick or Treating." In this time of change, the American Irish were also influenced by Native American stories of ghosts and American Colonial stories of witchcraft. These elements contributed greatly to the evolution of Halloween being a truly American observance. Halloween gained a lot of popularity during the 1920’s, when American cities began sponsoring costumed parties and parades. In the 1930’s, radio programs united all the different Halloween traditions across America into one distinct holiday.

Until the end of World War II, Halloween had mostly been an occasion for adults to party and for teens to play pranks, such as soaping windows and tipping over trash cans. After World War II ended, the population exploded and the “Baby-Boom” parents saw Halloween as a unique, fun holiday to include their children in. Children’s programming with Halloween themes, like the classic “It’s The Great Pumpkin Charlie Brown!”, became wildly popular and influenced a generation with fond Halloween memories. Unfortunately, in the 1970’s, Halloween had started to acquire a dubious reputation. A child was reportedly killed after eating “Pixy Stix” laced with cyanide. It was later revealed that his father had poisoned the candy to collect on the child’s insurance policy. Other “urban legends” arose about needles and razor blades being inserted into apples and candy.

In the late 1970’s and throughout the 1980’s, Halloween had decreased in popularity and the only passionate participators in the holiday seemed to be teenagers who dressed as the villains featured in the “mad slasher” films that were so popular at the time with young audiences. Then came the 1990’s. Now the “Baby-Boom” children, in which the holiday had played an important part in their lives, have truly embraced Halloween. They have become parents themselves and lavishly celebrate the holiday with family and friends making Halloween one of the most popular holidays in America, second only to Christmas.

IT IS THE NIGHT OF HALLOWEEN

The Crypt Keeper wishes you a Happy Halloween! It sure feels like Halloween Night

We know you enjoy the eeriness, and the lure of the candy. Perhaps the possibility of playing and the pranks. IT IS THE NIGHT OF HALLOWEEN POEM Did you hear the screming
It is the night of Halloween
And you have come to visit this place.
You have come for treats
But you'll find tricks As you walk around the corner
The night gets darker
As the fools full moon becomes hazy
And the wind begins to spin Soon here
Your feelings are not quite clear
It's the night of Halloween
You get the feeling there were others But you still feel alone
Trying to be aware and still
As your quiet nightmare has begun
You really want to run
But you know you must go slowly
So you make no mistake Now you could knock on the door
But you hear the door creek open
As the ones begin to scream
Things go whirling
Like your caught within a dream Then the dead start rising
And you must go through the door
Oh no what awaits you
Must be horror to its core Author:

It Is The Night Of Halloween Poem

Get Ready To Screem Someone got to loud and woke up the mummies. It started. The buried dead have been released from there pit graves. The mummies are comming. Run!

Thank ou for visiting our strange universe. You know we will be adding more! We are an eternal entity. And the voices told us you were coming. Ha, ha. "Life is too important to be taken seriously." ~ Oscar Wilde 1856 Wishing you a Happy Halloween all year. Help Support our websites. Please click the PayPal Seal.
Or Donatiosn disaster relief and recovery

Lit in memory of those lost due to corona virus pandemic.

and Susan The Caretaker of this
Unique International On Line Haunted House!

***** Lizzie Borden and The House in Fall River Massachusetts *****

Check out Dorothy Parker A fun loving woman and artist! And others like her that were mistreated because at the time it was the popular thing to do. This woman had many friends and she was very artistic. But she got blacklisted. ***** Dracula - Dracula Lives Halloween Fun Scare ****** The Butcher Boy ***** How Creepy Is this. Robert the Doll ***** Barbados Vault ***** HMS Orion ***** China Doll ***** The Flying Dutchman

Harold Shipman Prolific Serial Killer ***** Psychopaths Have Feelings: Can They Learn How To Use Them ***** Cambridge Rapist Peter Cook

***** As you lurk through our dark corridors at one point or another you might want to learn more about us and our Halloween home spun Web site. Home Spun About Halloween Fun Scare ***** Webmaster Things ***** FREE Stuff ***** Boutique Halloween Fun Scare Boutique ****** Awards ***** Webrings. ***** VOTE & Top Sites ***** Add Your Site
We are listed as an absolute terror web site. And an International on line haunted house.

***** I have gone fishing. This is the end of my work at Halloween Fun Scare and I have gone fishing. (This one always cracks me up!)***** ***** Need a break from this haunted house mental institution. Join us or try the mental hotline.
: Subscribe BeWitched Halloween Music PlayList YouTube Halloween Music PlayList Our Scary Pets
Jackson is our guard dog. He will protect this website. Beware!

Web Site Guardian Halloween Fun Scare International On Line Haunted House is luring you with the magic of the night, and the uniquely creative & strange ways that we have fun. We conjure a fun Halloween. This will have you wanting more as our site grows and takes full effect. "We've Got The Spirit"

More of our websites.